Just following the end of the recent "standard" northern Washington-souther Vancouver Island ETS, another has apparently started heading south toward Oregon.  A recent post give lots of information about slow earthquakes trembling beneath Vancouver Island and another provides a general  perspective on tremor activity.  These and the Deep Tremor News giving details and observations of the recent activity provide lots of background and related information to help understand this post.

After many years of following ETS activity by tracking deep tremor with the wech-o-meter many of us think we can make some educated guesses about what will happen next.  As often as not we are wrong (at least I am) but that is often the way science progress is made; develop a hypothesis about some phenomenon and then test that hypothesis against what happens in experiments.  In our case the experiment is done for us by the actions of plate tectonics.  Thus I will hypothesize that what has started over the past couple of weeks in southern Washington will develop into a full, major ETS covering north and central Oregon.  There are two observations I base this forecast on.  The first, as mentioned above, is the observation that tremor has been moving south in southern Washington.  It appears to be headed for Oregon.  For the second observation it's useful to look at the pop-up plot that Aaron Wech provided in his "perspective" post showing the time history of tremor plotted against north-south distance. This 10 year plot shows tremor activity isolated in both time (a few weeks) and space (up to a few hundred kilometers),  Each of these major streaks represents a slow-slip earthquake often recognizable by GPS data as a gradual shift to the south-west of a few cm.  The very small (and short) streaks are probably also slow-slip earthquakes but are too small to usually show in the GPS data.  The most recent Vancouver Island-northern Washington ETS is labeled as "Current Activity".

One thing that obviously stands out in this plot is the relatively few streaks in the zone between southern Washington and southern Oregon.  In southern Oregon and California there are many streaks, particularly in the most southern part.  From this plot it seems that in norther Oregon there are very obvious, major ETS events only about every two years (mid 2007, late 2009, mid 2011 and mid 2013).  While there seems to be a small event in central Oregon in late 2014  it has been more than two years since a major event.  Our hypothesis is that these ETS events are readjustments at the bottom of the transition zone between locked and freely sliding parts of the subducting interface and apparently occur at fairly regular intervals.  These readjustments  should even out over time and so central Oregon is "over due" for one.

However if we look at the details of some of the previous major ETS events they don't seem to follow a consistent pattern.  The following figure shows the color coded (blue earliest, red latest) developments of three major northern Oregon ETS events and also the minor one in 2014. 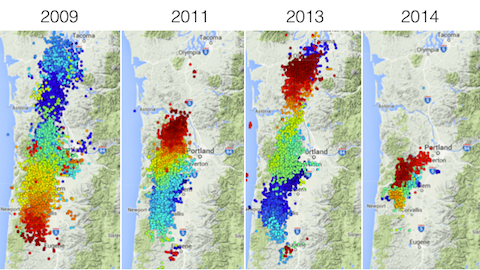 The ETS event of 2009 followed a fairly uniform pattern of starting in the north and propagating fairly uniformly to the south. The other three did much more jumping around.  For example the one in 2013 started in the far north, jumped to near Corvallis, propagated both north and south from there for a bit before continuing only to the north ending at almost where it had first started.

The current continuing ETS may be doing something similar, though it has been active in the north end of its zone (southern Washington) for over two weeks so it will probably end up having its own unique pattern.  Time will tell if this is the case or if it will even develop into a full zone ETS.  You can follow its progress with the daily updates of the wech-o-meter and from time to time the Deep Tremor News will be updated too.