Come for the pretty pictures, stay for the science.

Come for the pretty pictures, stay for the science.

On November 11, 2018 after a few months of earthquakes near the island of Mayotte off the coast of Madagascar, there was likely a magma chamber deflation event.  It spawned strange seismic signals along with a twitter feeding frenzy among citizen scientists and seismologists alike.  Thanks to Twitter user *******Pax (I hope I counted the number of stars right) who pointed out a strange seismic signal, seismologists and other geoscientists around the world have quickly jumped on the bandwagon of analyzing a very odd M5.0 seismic signature from a magma chamber deflating under the ocean floor near Mayotte.  Or is it inflating?  I think the latest consensus is deflating.  Near real-time science is often dynamic and fluid so it's best to keep your arms in the vehicle until we arrive at our published in a peer-reviewed journal destination.

Here is a long twitter thread to see how this all played out from citizen scientist to full blown conference material.

And here's the figure that sparked it all.  See that big fat thing?  It's a surface wave, a seismic wave from an earthquake that, you guessed it, travels along the surface.  This one is unusually long in duration.  So some seismologists started poking it with a stick.  Turns out it is very monochromatic.  Mono-same, khroma- color (greek).  So a monochromatic seismic signal is one that is basically all at one frequency.  In this case, with a period right around 16 seconds. 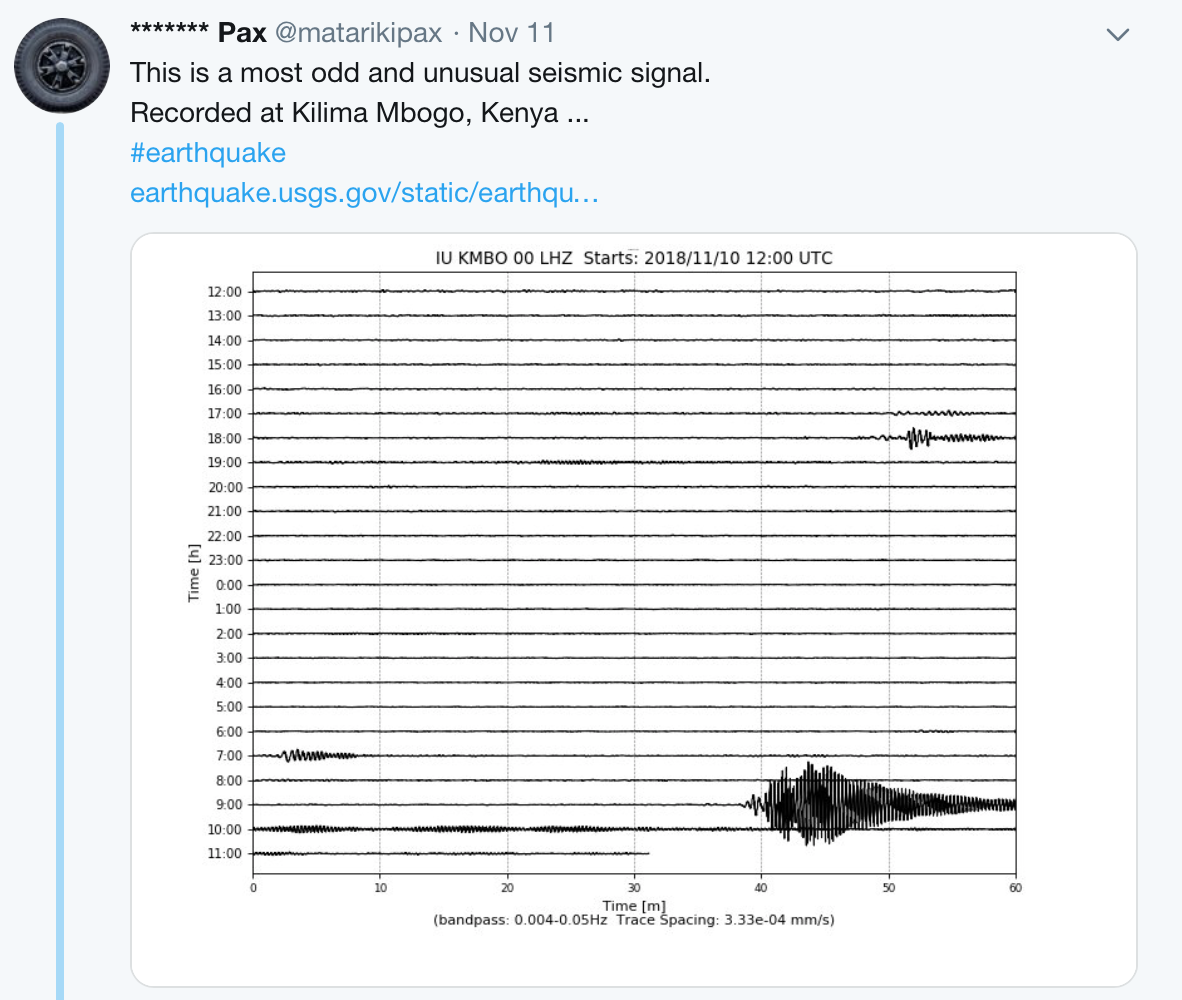 Nerd alert!  For modeling purposes, earthquakes can often be treated as impulsive sources meaning amongst other things, it excites energy at all frequencies.  The earth sucks up higher frequencies, which we call attenuation.  The result is that far away stations see low frequency/long period surface waves quite easily while body waves (waves that go through the earth), which are richer in high frequencies, are often much smaller in amplitude.  But our friend here is totally dominated by 16 sec period energy.  This is probably related to the structure from which it is coming from.  Just like a drum has a dominant frequency dictated by its shape and size, so are magma chambers sometimes.

But that's not really why we're here.  We're here because of the odd and beautiful seismic data it produced.  Come for the shiny pictures, stay for the science.

Take a look at the GSN record section for Mayotte (the pretty one on the left).  Full res is better.  That's data from all around the world recorded by the Global Seismic Network.  Note that the distances go from 0 to 180 degrees.  We here in PNW are at about 140 degrees.  In other words, very far.  When I, a seismologist, look at that figure I think holy smokes! that's very little attenuation and long duration.  As expected, the farther away you go, the smaller the amplitudes get due to geometric spreading and attenuation.  For reference, look at the more blah one on the right.  That is from a traditional M5.2 earthquake in the same area so it experiences the same joy rides (continental vs oceanic paths) as the Mayotte event; it's plotted using the same amplitude scaling.  As you can see, amplitudes fall way off and it gets rather boring.  But not this Mayotte event!  It has the unusal property of long duration and resilience.

Note: the full res versions that you get by dragging the figures to your desktop are much prettier and make the article more fun since you can toggle between them. 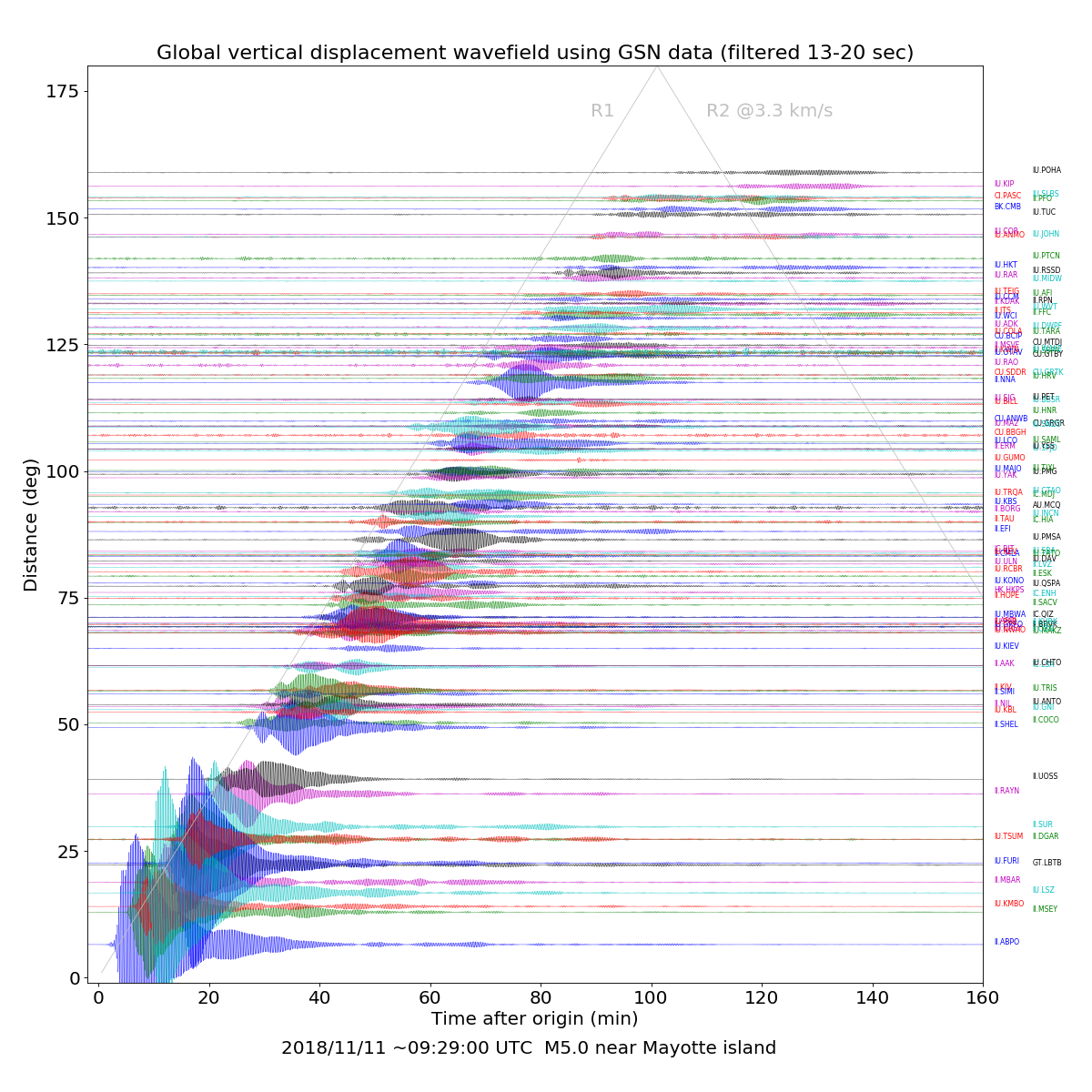 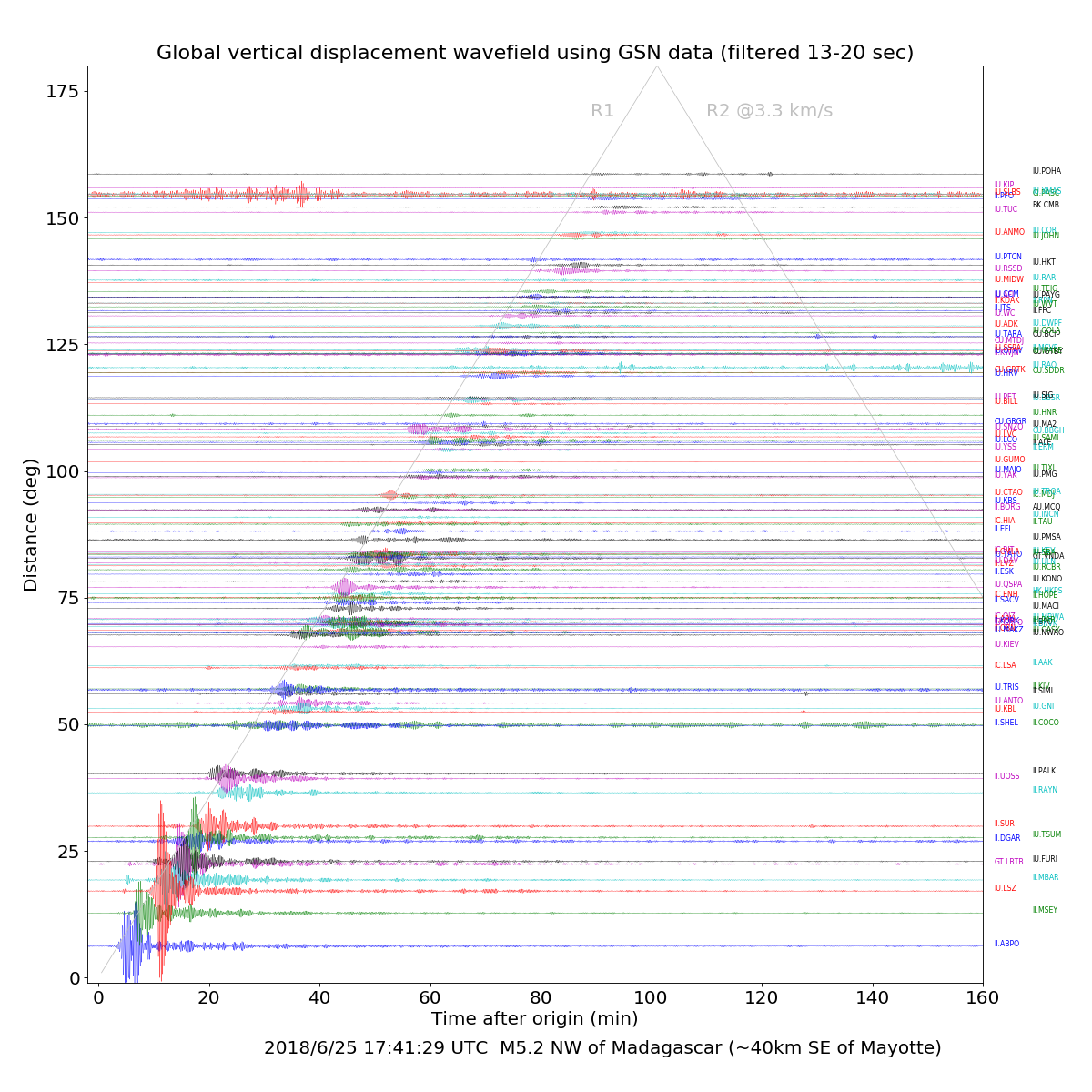 OK, that's fine and dandy, but does our backyard network, the PNSN, have anything to say?  I'm glad you asked.  Take a look at the PNSN record section for Mayotte.  There are travel time curves of 3.3 and 3.6 km/s drawn for reference which are about the right velocities for these frequencies.  Note the origin time isn't exactly pinned down, so let your mind's eye shift all the wiggles together left/right.  Quick side note.  If you and I walk and sometimes swim in the opposite direction on our round earth, after a few millenia we'll eventually meet, because science.  Same for seismic waves from an earthquake.  At the antipode, 180 degrees away, they'll arrive at basically the same time.  But if we are on Mayotte and agree to meet in Seattle 143 degrees away, one of us will have a shorter route of 143 degrees, while the other will have a longer route of 217 (360-143) degrees.  Or short/minor arc and long/major/great arc to be nerdy.  R1 is the short arc Rayleigh wave, R2 the long arc.  Here's a pleasant video that shows Rayleigh wave propagation and particle motion.  We are only seeing group velocities in these plots, that is the velocity at which energy (the fat features) propagate.  Phase velocity is the velocity at which peaks to peaks propagate which you can't really see in these very long duration plots.  The next time you take a ferry, look behind the boat.  The peaks move at a different speed than the whole packet of peaks which forms the V shape.  Phase versus group. 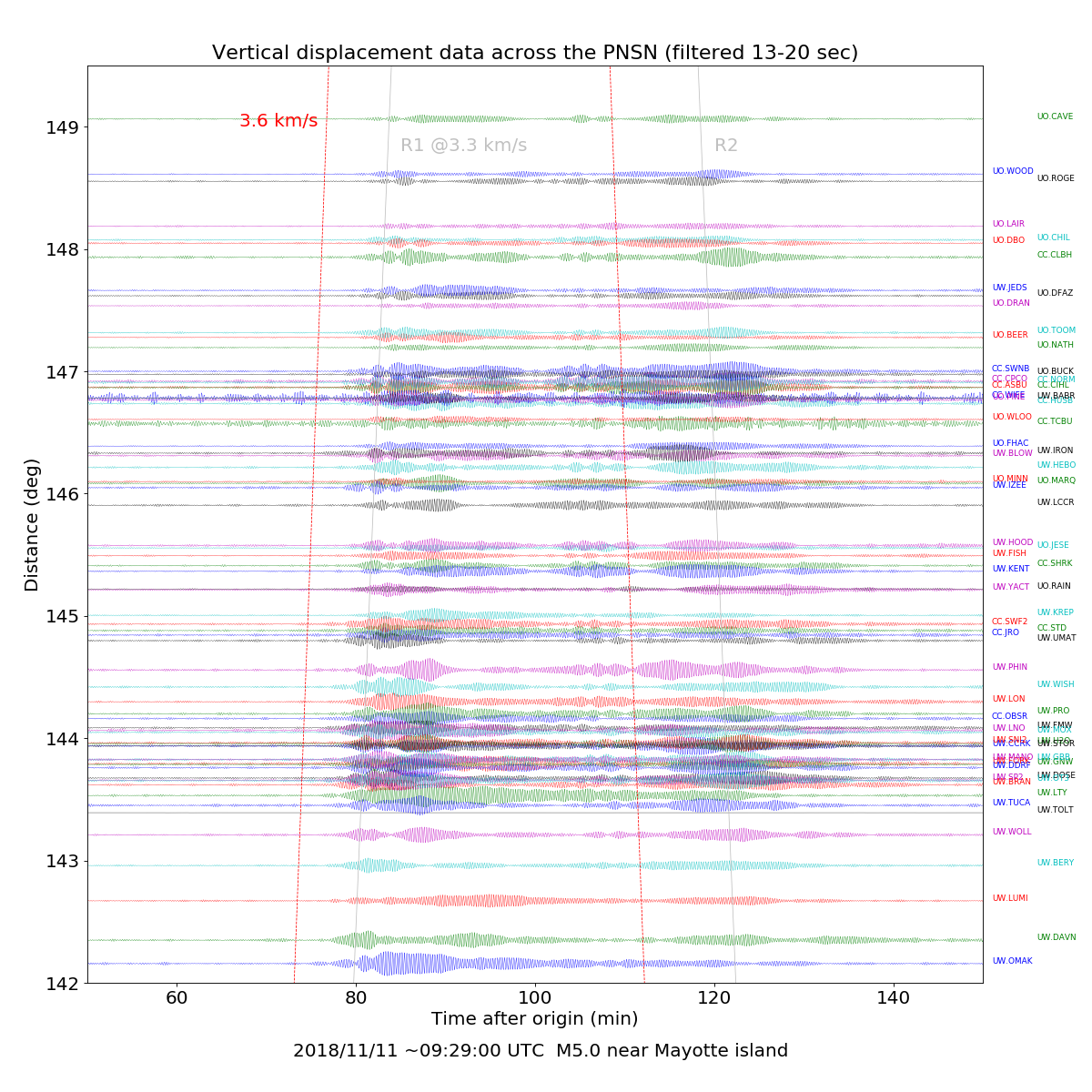 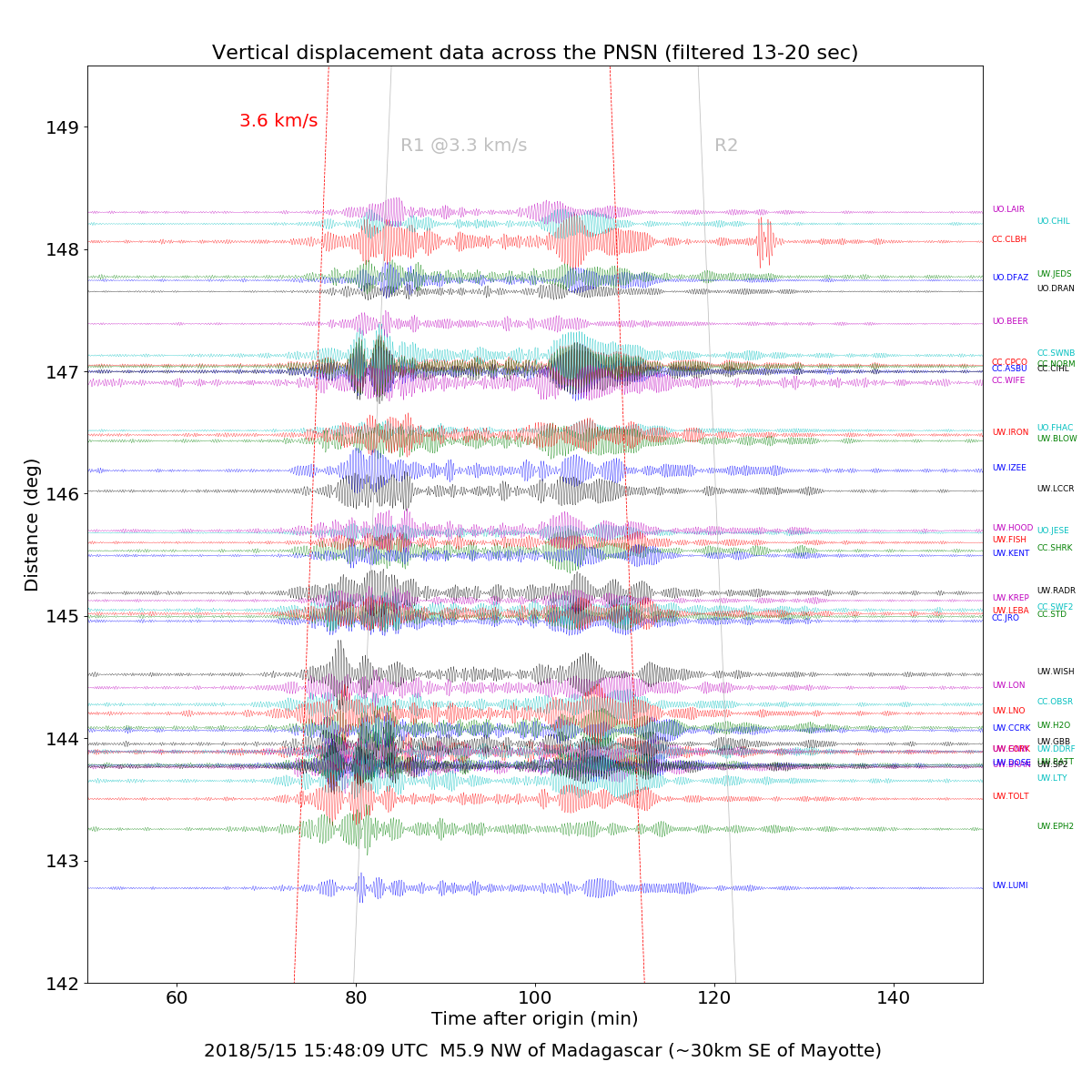 Everybody still with with me?  Bueller?  On to the good stuff.  In our plot of PNSN data for Mayotte, R1 is the thing coming in around 80-100 minutes and then R2 starts to come in around 100-130 minutes.  Earthquakes don't distribute energy evenly in all directions, underground nuclear tests, as close as we get to true isotropic sources, almost do.  But a magma chamber rumbling is not slip on a planar fault like traditional earthquakes.  It turns out if you look at the moment tensor for this event it looks like the classic fried egg characteristic of a collapse, ableit an asymmetric fried egg.  The collapse at Kilauea earlier this year had a similar moment tensor.  See the twitter thread above for links and figures.  With this in mind, one would expect similar looking features for R1 and R2- similar duration and overall shape.  But that's not the case!  Que giddy seismologist.  R2 decided to walk it's own path and thought mullets were a good idea like all 4th graders do.  Hey, it was 1988.  And by path I mean continental versus oceanic.  For the paths from Mayotte to the PNW, R1 happens to ride right along Africa, Europe, some of the Atlantic, and then North America while R2 is pretty much a straight shot across oceans.  Continental crust and oceanic crusts look differently to seismic waves and it's not super intuitive at all.  Just look up Rayleigh versus Love wave sesnitivity kernels.  Yuk.  The "simple" version is below on the right.  So are the differences we're seeing between R1 and R2 path or source effects?  Yes.  As a reference, look at the equivalently plotted record section on the right showing waves from a nearby M5.9 earthquake that has the same path effects as our rumbly chamber.  Side note: a M5.9 is over an order of magnitude stronger than a M5.0 in terms of energy.  This record section looks more like what we're used to. 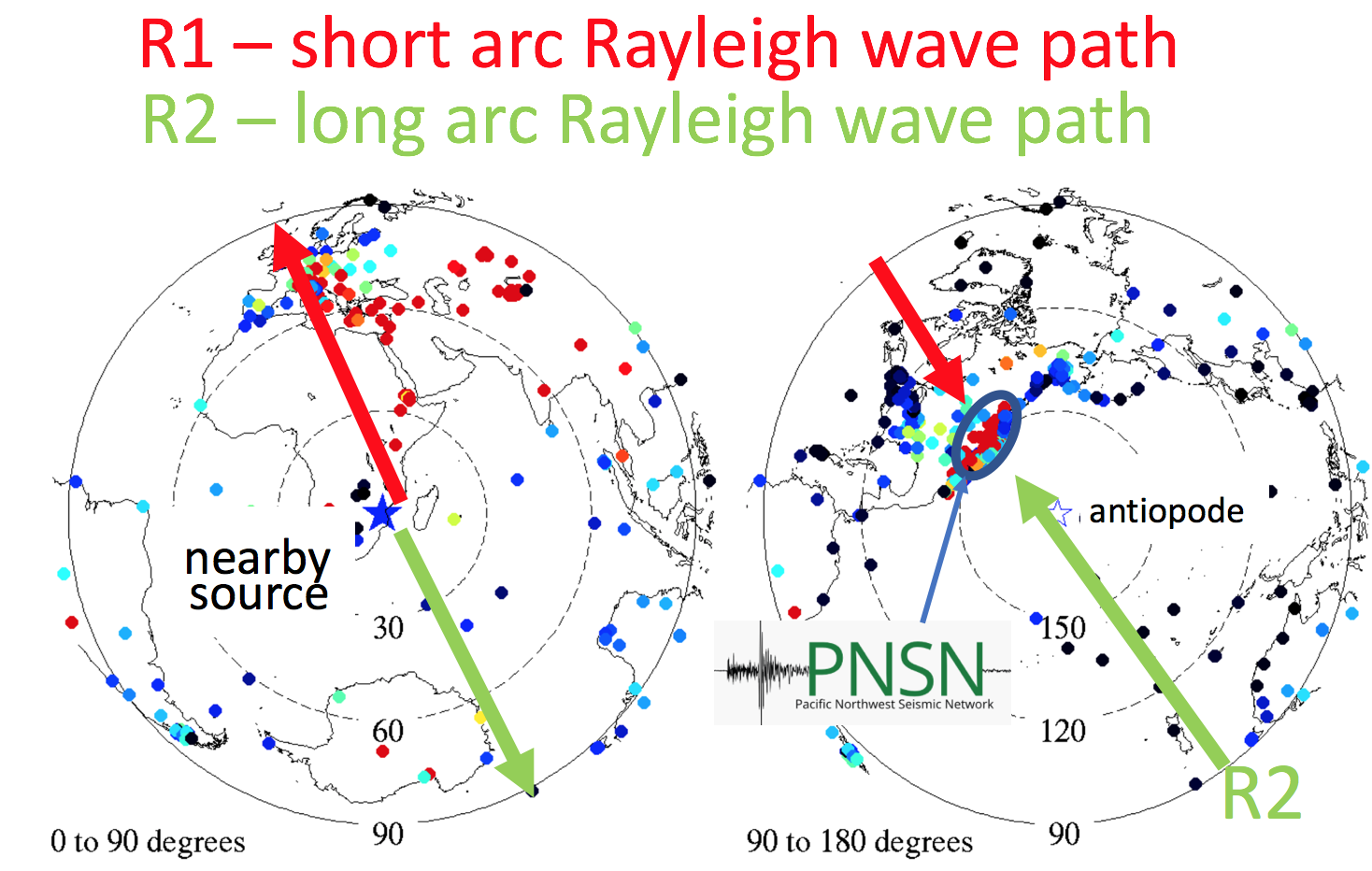 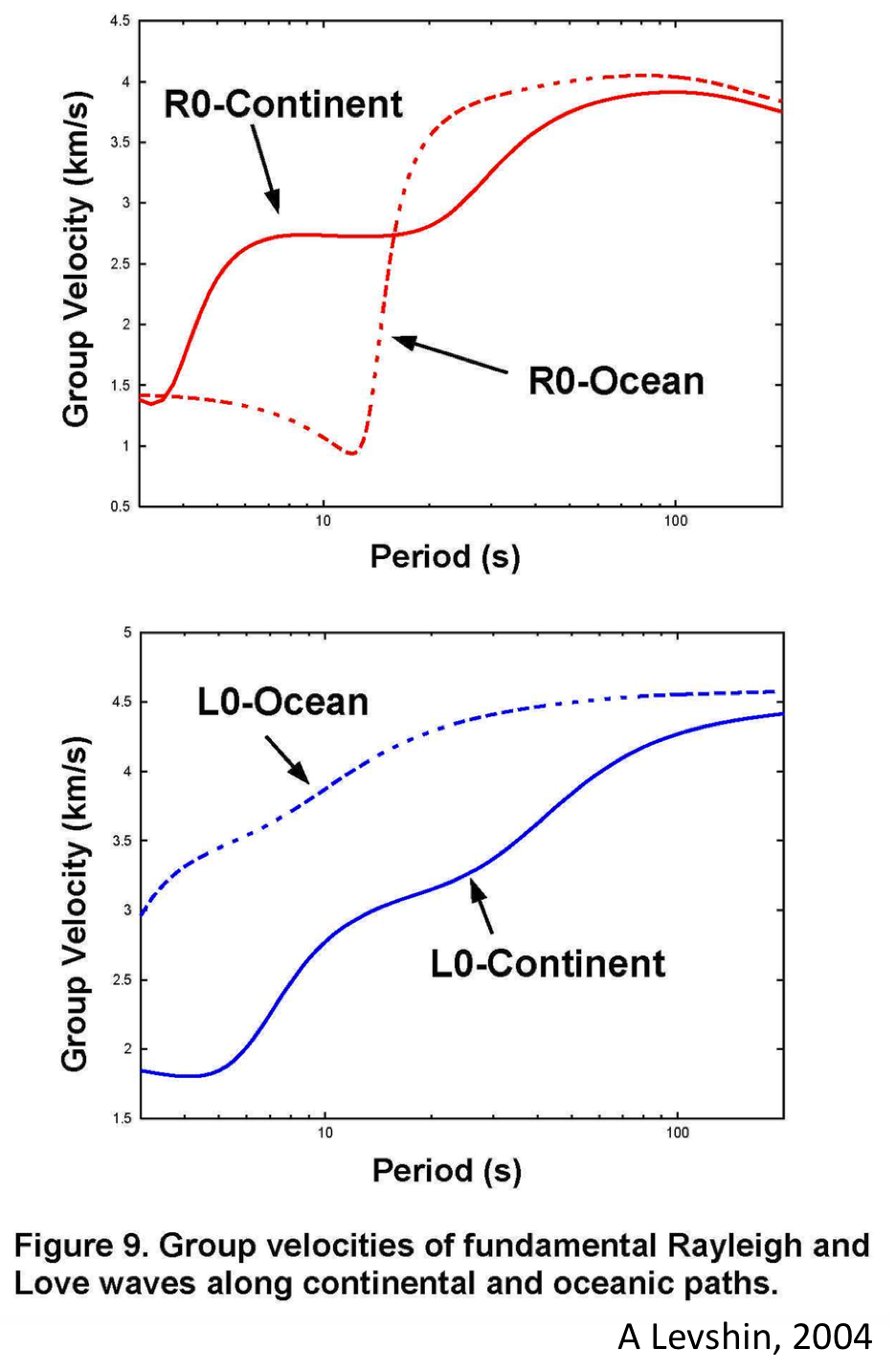 So what's the story behind Mayotte's Rayleigh waves as they grace the PNSN?  My colleagues and I didn't have a great answer just from looking at these plots, but we agreed something interesting is happening under the seafloor near Mayotte.  I guess that we'll eventually get a more detailed answer at conferences in the coming months or peer reviewed journals in year or so, but in the meantime it's fun to be a fly on the social media wall as science unfolds with hot off the press results.  And sometimes curious citizen scientists kick start it all.  So stay curious.

2004 Levshin paper from 7th Workshop on Three-Dimensional Modelling of Seismic Waves Generation and their  Propagation. 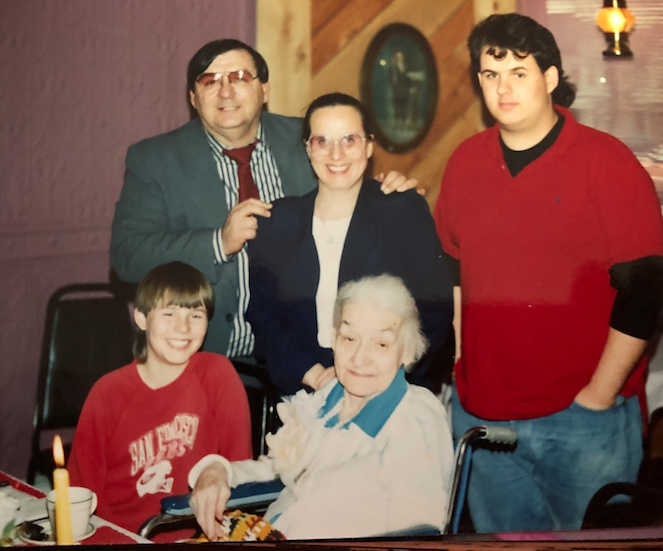 1988- taking hair and football queues from my family.  I've since wised up.