The Seattle Fault Zone runs West to East right through downtown Seattle and has the potential of being the source of a large (M6+) earthquake. It was therefore quite exciting when a small earthquake (Ml=3.3) happened right below the Seattle Fault Zone near Bremerton last week and was followed by aftershocks, and then again by a Ml=3.4 earthquake and another Ml=3.6 earthquake last night (as I am writing this our prototype Early Warning App is telling me another earthquake just happened, it is 10:57PDT on the 11th, this one turns out to be near Whidbey Island instead).

Rather than call it a mainshock-aftershock pattern, we can now call it a swarm, which basically means a cluster of earthquakes close in space and time that doesn't have an obvious mainshock. Swarms of small earthquakes are not unusual in our region. In fact, I found at least 6 more PNSN blog posts about swarms in WA or OR (links at the bottom of this post). However, this swarm is interesting in that it might be related to the Seattle Fault Zone.

See the mapview below for locations of the earthquakes in this swarm. Important to know is that the smallest dots on the map are probably not in the correct location. These earthquakes are so small that they are not well-recorded on all the nearby seismometers, which makes it difficult to locate them well. We are quite convinced that these ocurred in the same area as the bigger ones (except for one, but more about that later) because their waveforms look similar to the bigger ones on those seismometers that did see all of them. 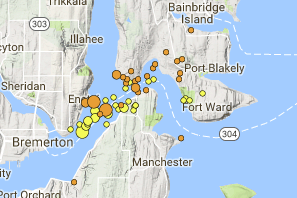 When we draw a North-South (i.e. perpendicular to the Fault Zone) cross-section right through the well-located part of the swarm, we see that these earthquakes are very deep, around 25km depth. 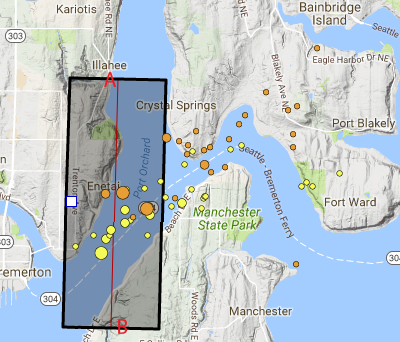 To understand why, I am about to put in a very complicated and not very well re-produced figure from a scientific paper published in 2004 that summarizes some ideas about what the Seattle Fault Zone might look like at depth. I put red circles on the plot to show where exactly the current swarm is located. 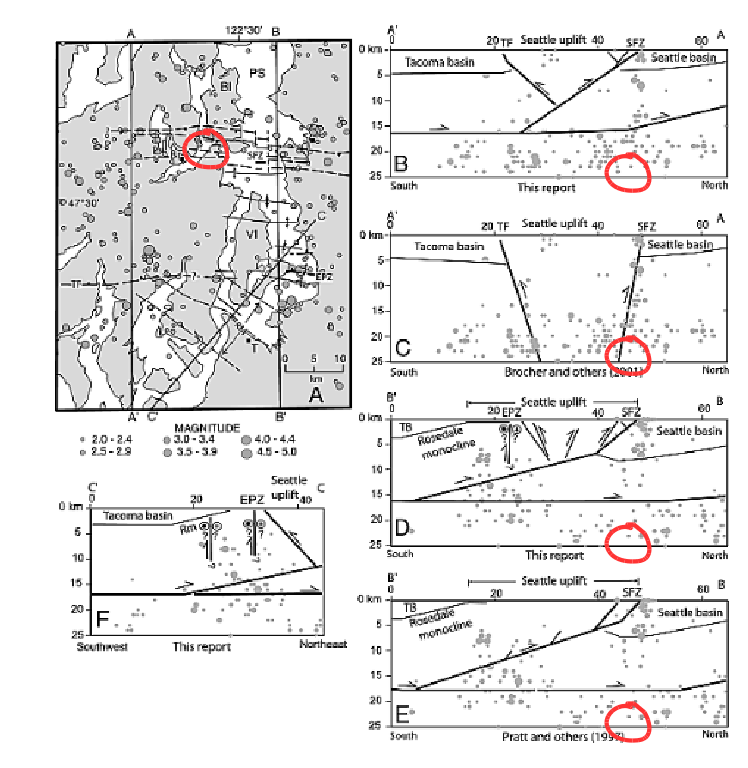 Almost twenty years ago, in June of 1997, a magnitude 4.9 earthquake occurred very close to this swarm (see legacy page to read about it: http://assets.pnsn.org/notable/WEBDIR_97062319131p/index.html). That earthquake and its aftershocks were much shallower and therefore more likely actually located on a strand of the Seattle Fault. In fact, you can see those earthquakes at 10km and shallower above the red circle in the previous plot.

So, to answer, what is going on? We are having a nice vigorous swarm deep below the Seattle Fault Zone. The focal mechanism of the bigger events are consistent with North-South contraction.  But we don't really understand what causes these swarms. It is possible that more, and bigger, earthquakes happen. It is also possible that this area quiets down again. The swarm is providing us with some nice local waveforms that might be able to tell us more about the local crustal structure. For now, all we can do is what we do everyday, keep monitoring the seismicity in our region! What you can do is to make sure to be prepared for emergencies, check out the CREW website for ideas: http://crew.org/what-you-can-do