An area just east of Fall City, WA that commonly has a few small earthquakes a year again was active the night of Dec 18, 2019 (early on Dec 19 GMT time).  By the morning of Dec 19 over 1,300 felt reports were logged on the Did-You_Feel-It (DYFI) web page/forms for the Mag=3.4 earthquake that took place at 7:10 PM PST.   About a dozen aftershocks have been recorded since then, some too small to easily locate.  The largest aftershock (Mag = 3.0), at 04:41 AM PST this morning has been reported felt by just over 300 people.

This area, on the west flank of the Cascade mountains is known for having sequences of earthquakes such as these.  The faulting mechanisms associated with these event are consistent with the known north-south compression that crustal rocks in the greater Puget Sound area are under.  Here is a map of the larger (Mag >2) earthquakes in this area recorded by the PNSN since it started operating in 1970.  The stars (not to scale) are the locations of the recent two larger events. 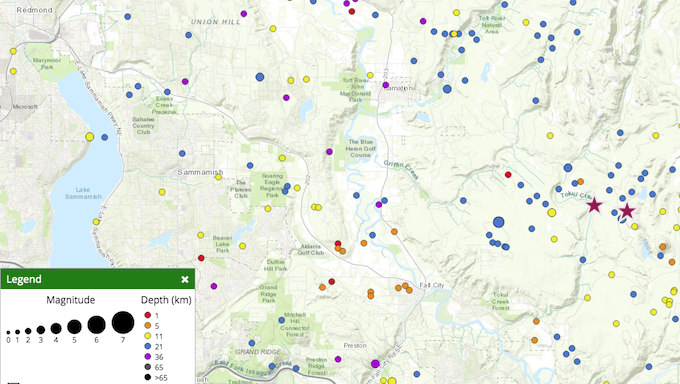 Earthquakes in this area are often in the depth rang of 15 - 20 km (9 - 12 miles), which means that the shaking even right near the epicenter will not be as strong as if it were much shallower.  All of these recent events have depths around 16 km.  At these depths and with several mapped faults in this area it is not possible to definitively say which fault these events are on.

While these events do not lead us to think that anything unusual is going on, they are reminders that we live in earthquake country and that damaging earthquake can take place at any time.

Material will be added to the post later if additional analysis turns up anything new or interesting.