We've been watching Newberry Volcano, as our monitoring effort there is new.  Steve nicely summarized the odd ice quakes there earlier this week.  Wednesday, three novel signals appeared, and we're somewhat at a loss.  They're of no concern, the arrival time between stations is so long (the waves are so slow) the source must be waves in the air or else an object in the air moving across the network, but still we wonder.

The times of the three, 6pm, 8:10pm, and 8:40pm March 6th (remember UT or UTC is 7 hours ahead of PST) are evening.  None showed up in the prior week, and none have been seen since.  Here are ten minutes for the 6 Newberry stations of the clearest signal.  It lasts almost a minute at each station, starting at a pitch of 12 Hz, steadily dropping to 5 Hz before fading. 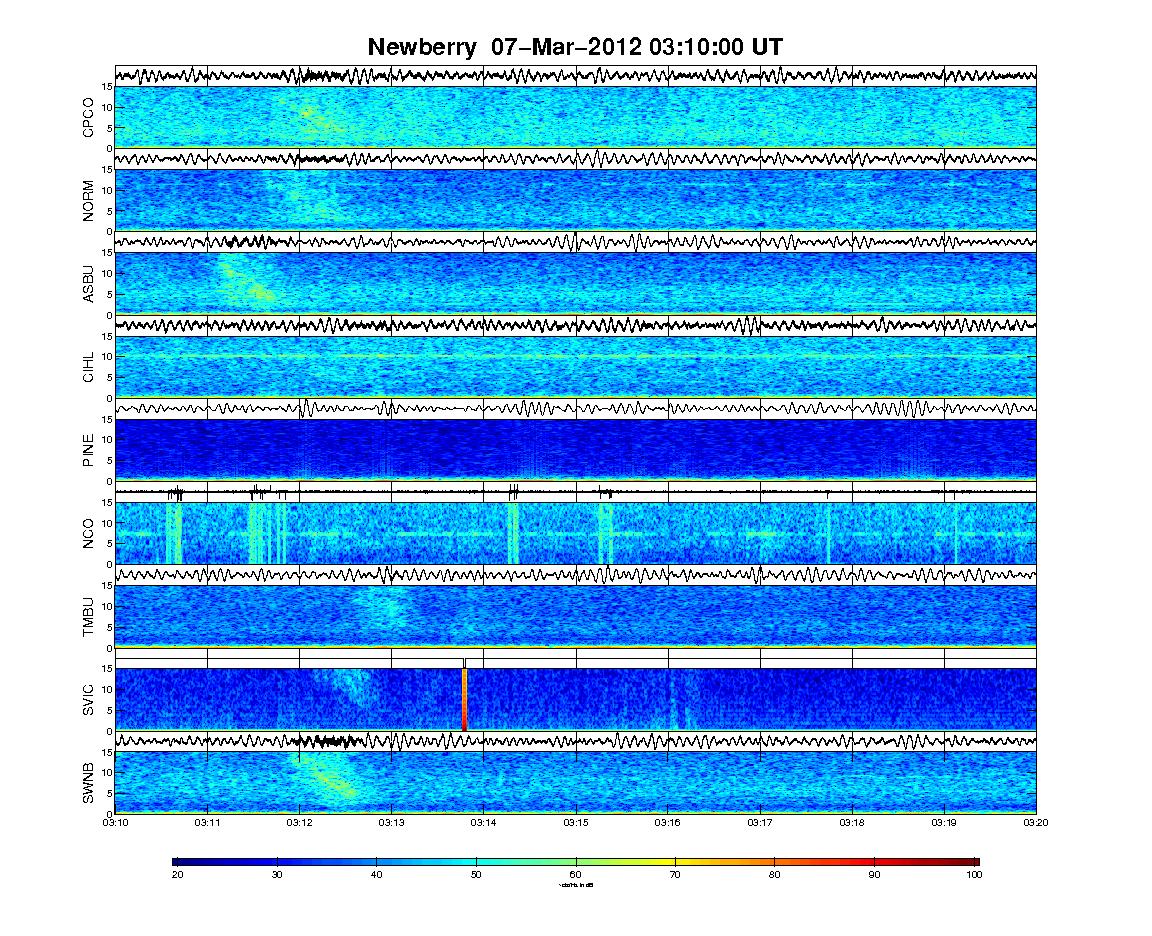 Here's a blow-up, with the tick marks on the bottom a minute apart.  Click either figure to expand for a better view.

Steve's first and only suggestion was maybe it's a plane or helicopter, with the change in frequency over time a Doppler shift.  A Doppler shift is the elevation of the pitch of an approaching object, like an ambulance, or the drop in pitch of the object traveling away.  The signal does indeed start high pitched and drop over time.

But do jet planes have an 8Hz hum?  Also, the change in pitch seems too extreme to be a Doppler shift, especially for a plane way up high.  For a Doppler shift to go from 12 Hz down to 5 Hz is about +40% and -40% compared to the 8 Hz pitch if it weren't moving, is surprisingly big, and stations to the side should see less shift, which they don't.

Also the evolution of the frequency shouldn't be linear, rather it should be more sigmoidal, with a big change just as it is going by.

We can see the energy propagating to the southeast, from ASBU to TMBU, a distance of about 30km.  The time difference is about 90s.  330 m/s is close to the speed of sound.

In summary, either an object is traveling near the speed of sound to the southeast over our array, and our intuition of how it should look is wrong, or a loud sound to the northwest of our Newberry array has been recorded over a large area.

But could a sound loud enough to record on many of our sensors look that way and travel that far?  A head-scratcher.