The PNSN is responsible for the routine seismic monitoring of the Cascade range volcanoes in Oregon and Washington and coordinates very closely with the Cascade Volcano Observatory (CVO) of the US Geological Survey's Volcano Hazards Program who monitor many other parameters and have the mandate to study and evaluate all volcanic hazards.

The above plot is updated frequently to show the distribution of earthquakes located at or very near the major volcanoes.  Under many of the volcanoes' special pages there are "seismicity" tabs giving updated maps, time-depth plots and seismiscity rate plots to help understand the seismic activity at each.

There is a weekly update provided by the CVO for Cascade Volcano status.

Cascadia is home to numerous active volcanoes that form as a part of the subduction process. Volcanic eruptions in the Cascades are infrequent, but may be violent.  Here is a graphic indicating the eruptive history of many volcanic centers based on the geologic record. 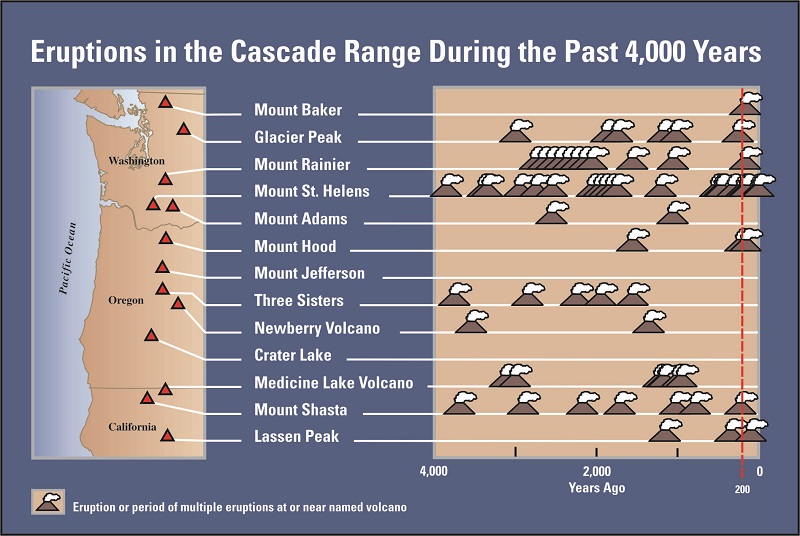 Eruptive episodes are likely to be accompanied by copious seismicity as magma works its way to the surface. Earthquakes, even "swarms" of earthquakes at volcanoes are not necessarily a sign of an impending eruption, but together with other observations (deformation, gas emission, temperature changes) they provide one important and early clue when eruptions may be approaching. Volcano seismologists track not only earthquakes, but also various kinds of seismic signals with special characteristics that suggest magma movement.

A special challenge at Cascade volcanoes is seismic activity associated with glacier movement, icefalls, and rockfalls—these are the most common signals we see! Distinguishing between all the different types of seismic sources can be difficult: a job for a specialist.

These pages provide an ongoing overview of earthquake activity at the monitored volcanoes in Washington and Oregon. Simply the number of located earthquakes at or near a volcano is not necessarily indicative of impending volcanic activity. Besides number and size there are waveform characteristics, changes in these characteristics, event depth, and changes in exact locations that go into the interpretation of seismicity patterns. These interpretations are combined with other available geophysical monitoring parameters and a good understanding of the geologic history of a volcano to arrive at forecasts for future volcanic activity. The PNSN along with the CVO uses both automatic and manual reviews of our data to keep a close eye on our volcanoes. We are confident that we will recognize and be able to interpret the precursory geophyscal events that inevitably occur before significant volcanic eruptions.