A tsunami (pronounced tsoo-nah-mee) is a wave train, or series of waves, generated in a body of water by a disturbance that moves the whole water column. Earthquakes, landslides, volcanic eruptions, explosions, and even the impact of cosmic bodies, such as meteorites, can generate tsunamis. Tsunamis can impact coastlines, causing devastating property damage and loss of life.

The UW College of the Environment hosts a Tsunami web site providing a good overview of how tsunamis are generated and travel, their impacts, and how scientists can learn from the geologic records left by anceint tsunami events. 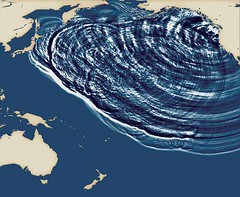 The Cascadia Subduction Zone (CSZ) produces great (>M8) earthquakes that are capable of generating large tsunamis that periodically threaten the coasts of British Coumbia, Washington, Oregon, and Northern California. The average reoccurance interval for these great earthquakes is between 400 and 500 years. Most, perhaps all, of these CSZ earthquakes produced tsunami waves. The last great earthquake here occured on January 26, 1700 and produced a tsunami that took lives in our region and across the Pacific along the coast of Japan and elsewhere.

The National Tsunami Hazard Mitigation Program (NTHMP) was formed in 1995 by Congressional action which directed the National Oceanic and Atmospheric Administration (NOAA) to form and lead a Federal/State working group. The Congressional action was the result of many things such as: recognition, in 1990, of the tsunami threat to Oregon, Washington, and northern California from a magnitude 9 earthquake on the Cascadia subduction zone, the April 1992 earthquake and tsunami on the Cascadia subduction zone in northern California, and the loss of life and property in Japan due to the 1994 Hokkaido, Japan earthquake and tsunami. These events, together with the historic Alaska tsunamis of 1946 and 1964, brought to light the general lack of tsunami preparedness and hazard assessment for the U.S. west coast and the need for significant improvement in tsunami detection and forecasting. The NTHMP is a partnership between NOAA, the United States Geological Survey (USGS), the Federal Emergency Management Agency (FEMA), the National Science Foundation (NSF), and the 28 U.S. Coastal States, Territories, and Commonwealths. One of the important products produced with NTHMP funding are tsunami hazard maps for the entire west coast. These maps lead to the establishment of evacuation routes and signage in coastal areas which greatly contributed to local hazard awareness. The program also contributed badly needed financial resources to States and local communities to run tsunami education programs in communities at risk.

Washington, Oregon, and California in the US share a high risk of losses from tsunami waves generated by the next grea Cascadia Subduction Zone earthquake. British Columbia is also acting to better prepare its citizens for this future disaster. Washington EMD, DOGAMI and OEM in Oregon, California OES and the Cal Dept. of Conservation are all working with local communities to reduce risk of losses from future tsunamis on our coast.