This BLOG-like page is being generated in a form similar to previous ETS ones to document and provide information on a Northern Washington - Southern Vancouver Island (NW-VI) ETS that should start sometime between Nov. 2021 and Jan. 2022.  There are no special experiments in the field for this ETS. We will be tracking and reporting on this ETS using data only from the real-time regional networks (UW,  UO, CN, PB, CA) and/or information reported to us by others.

Information will be posted on this page (latest at the bottom) and references to figures from time to time.

NEWS (latest is at the bottom):

Oct 5, 2021 -  Wait a minute.  This 2021 ETS is not supposed to start until about 14 months after the last one started which would make it due to start sometime in Dec, 2021.  Yet it looks as if something has already started.  As of today significant tremor has been going on in the central Puget Sound region since Sep 21 or 22.  Typically we feel that if tremor goes on every day for 10 days then a real/significant ETS is under way.  So, it now seems that is the case.

This batch started in a similar way to many previous ones.  The earliest tremor is fairly weak and down-dip (to the east).  It then moves up-dip (to the west) and then spreads slowly to the north and/or the south.  In the current case it seems to be moving slowly north reaching just north of the Olympic Peninsula and even with a small patch jumping across to Vancouver Island as of today.  There is even a scattering of tremor locations up in central Vancouver Island which is an area usually associated with an ETS in the NW-VI region.  Here is a map of these tremor locations color coded by time (blue - earliest and red - latest). 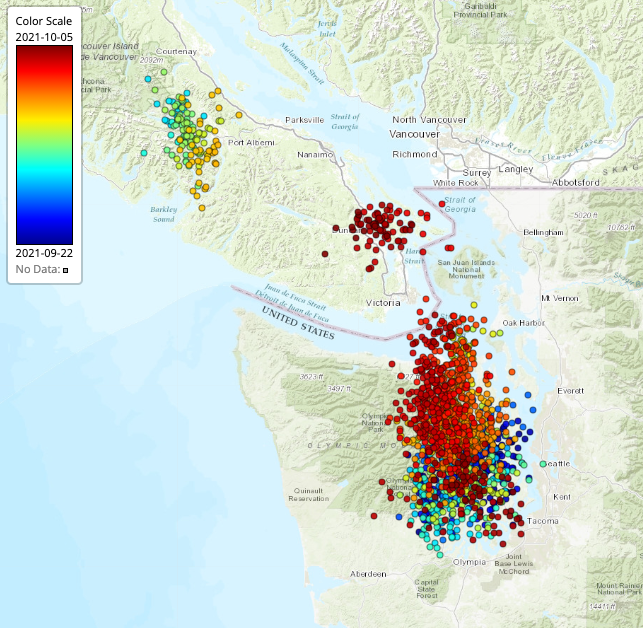 So, how unusual is such an early start and is there any significance to it? It is pretty unusual though there have been at least one recorded case when a part of the normal NW-VI ETS region had tremor only about a year since the previous one (2013).  Because of the variability of the way these ETS events take place we have no idea if there is any special significane to this early start.  It may be just another slightly different way these events unfold.  I will not stick my neck out at this time and try to predict how this may progress since there is every chance that it will quit in a day or two and not really get going for another two months.

By The Way - Within a week or so our tremor catalog will be updated based on processing of all the data since 2017 with the latest and most robust algorithms for tremor detection.  This "Version-4" catalog is not that much different from the Version-3 catalog that has been displayed for the past couple of years.  This latest version should have more uniform detections over the whole length of Cascadia and also is less prone to noise glitches in the seismic data that have generated spurious tremor locations in previous catalogs.

Oct 10, 2021 - This ETS is continuing primarily in the Olympic Peninsula but with some bursts on southern and even central Vancouver Island.  Also, within a day of my last post I got word from our local geodesist, Brendan Crowell that detectable motions on several GPS monitoring sites can be resolved.  Over the next several days this motion is now obvious, even to a seismologist.  After looking at the time-series from many/most of the sites with good data in this region I selected the following four sites to illustrate the motions detected.  These plots are for the east-west component derived from a system maintained by the Cascade Volcanic Observatory (CVO) who are particularly interested in motions on and around volcanos. However, their system acquires data from the processing centers for most geodetic monitoring sites all over the Pacific Northwest.  While these plots go from April 1, 2021 to now and show daily/weekly variations around 2-3 mm of motion (noise in the data) it is pretty obvious (to me) that these motions deviate significantly downward on the plot (toward the west) starting at about Oct 1.  The latest values are 4-6 mm below the mean over the past six months, which I am told is significant enough to indicate substantial displacements on the plate interface 30-40 km below the instruments.  This detectable displacement lags the detectable tremor onset by over a week.  This is typical and to be expected since any single tremor burst is generated by very small motions on a small patch of the interface and many of these must take place before the total area and displacement adds up to be enough to see the actual long term displacement at the surface. 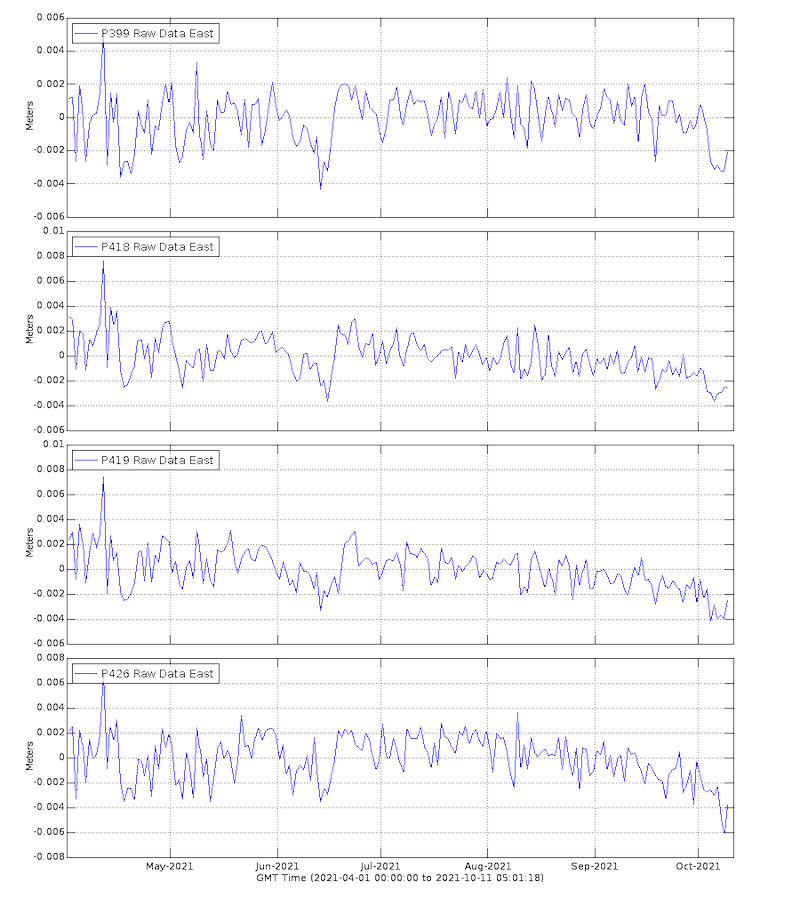 On the following time-by-color map of the tremor since Sep. 22 I show the location of the four GPS sites with detectable motion as of now.  I would expect other GPS sites to have resolvable motion show up in the future if this ETS continues and spreads either north or south.  The relatively short bursts of tremor on Vancouver Island are not yet enough to resolve motions there… at least by me. If this ETS progresses to include the area typical of a WA-VI ETS then I would expect some of the areas north of Washington to fill in with more tremor locations over the next few weeks. 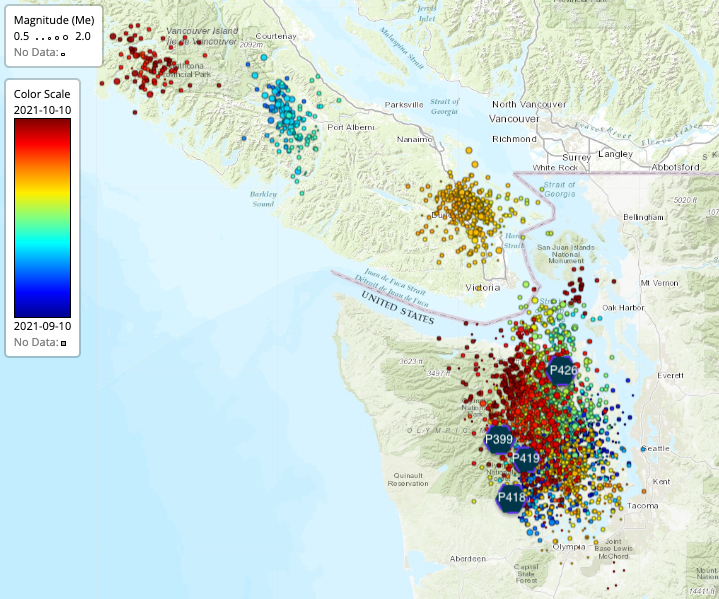 Now to address a few questions and comments received by various social media sources.  Some folks may be confused by what is shown and numbers given on our tremor page.  Keep in mind that this page covers all of Cascadia by default and this blog mostly addresses the ETS that we have been studying in detail that goes from southern Puget Sound north to south-central Vancouver Island.  This was the first ETS discovered by Rogers and Dragert (2003) using GPS and seismic data going back to 1996.  One can isolate this area by clicking the “Add geographic filter” box and “pulling” an area on the map.  Actually a good way to learn about all the fancy bells and whistles available on this cool interface is to click the “Start Tour” box in upper right corner.
There have been other comments about when a particular ETS starts and/or stops and if the inter event time is significantly decreasing.  Indeed, while the exact start and stop times I have chosen for this blog are somewhat subjective I have tried to use the same criteria in all cases.  One thing that complicates this process is that any given ETS does not necessarily cover the exact same area as a previous one covering the same general region.  Also, while tremor generally starts in the down-dip (eastward) part of the plate interface and then migrates up-dip (westward) before it starts migrating either north or south (or both directions) it sometimes jumps leaving a space without tremor for a while.  Usually it fills in the gap sooner or later but sometimes it is much later.  The previous ETS in the NW-VI region was just such a case not filling in the gap between the Washington part and the central Vancouver Island part until just over two months later. See the log entry for fall 2020 ETS.  Thus there is the semantic question if these were one long ETS with a hiatus or two separate ones because of both the time and distance separation.
A good way to visualize this complexity is making a plot of the latitude component of tremor locations versus time such as provided to me by Ken Creager who used the revised, latest catalog for the most recent five year period.  I consider the NW-VI ETS section to extend from the latitude of southern Puget Sound (47.2°N) to the latitude of Vancouver, BC (49.2°N)  (dotted lines on the plot below).  I used the Tremor density by ETS plots to determine these rough boundaries.  One can see that some tremor patches extend outside these latitudes or don’t quite fill them totally but I consider these a good general rule to use.  Clearly the tremor patterns north of latitude 47° are different than those south of it.  For a general discussion of the different regions and their characteristics (particularly that of the California section south of latitude 43° see the very nice summary provided by one of our grad-students, Carolyn Nuyen called “Silent Rumble Under Our Feet”. 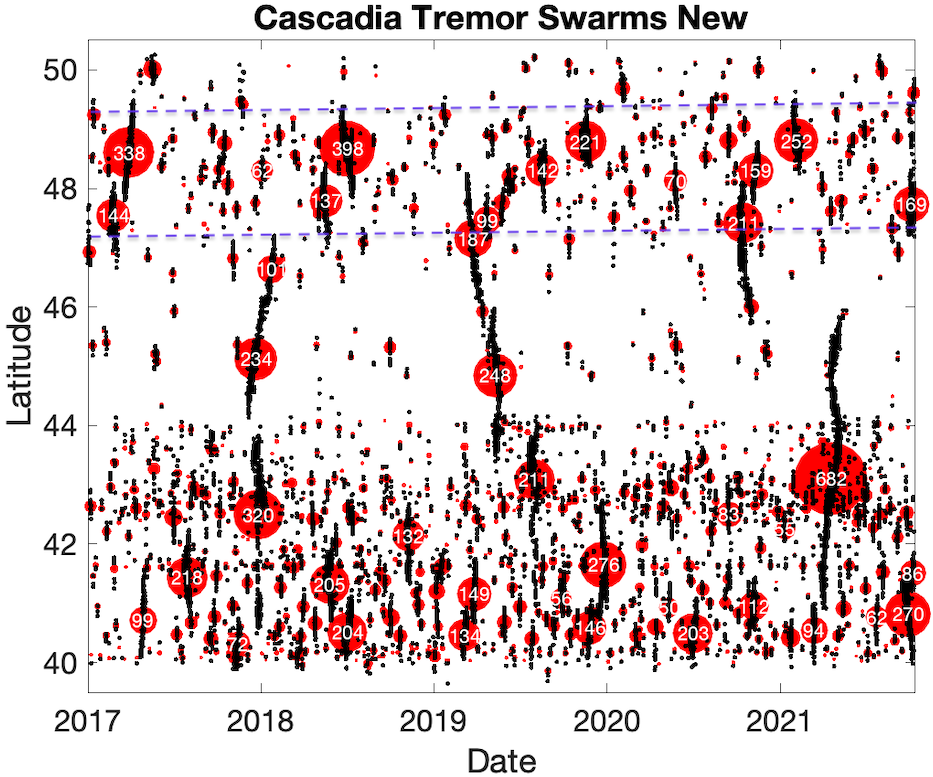 On the above plot tremor locations are shown as black dots and the red circles mark a set of tremor events that are considered linked in a space-time group that probably represents a slip event even though most of them (smaller) do not have resolvable slip in the GPS data. The number of hours of tremor in each group are displayed if there are more than 50 hours.  A rule of thumb is that numbers over 100 hours will have resolvable slip in the GPS data. Note that the latest time period has 169 hours of tremor and, as stated above, now has well resolvable GPS recorded slip.  Also note that there are patches of tremor north of the main patch which can be seen on the above map.  It remains to be seen if this northern area will fill in with more and enough tremor that resolving the slip geodetically will be possible.
On a subsequent post I will try to address comments about changes in the inter--ETS time and its possible relevance to real earthquakes.
Home
Recent Earthquake Map
Recent Earthquake List
Seismic Stations Map
Earthquake Search
QuickShake
Contact us
Helpful Links:
Fan Page Public Group