The University of Washington, Pacific Northwest Seismic Network held a workshop on campus for invited attendees to introduce the current prototype version of the EEW ShakeAlert and its User Display. The agenda for the workshop was followed closely with questions and comments solicited from the participants throughout the day. Suggestions and action items to be followed up on are listed at the end of these notes. Presentation material from each presenter is available through the password protected ShakeAlert-Users web page.
About forty people from 20 different groups attended the workshop including representatives from the transportation and utility sectors, private companies with in-house emergency response capabilities and state and local governments. Representatives from the PNSN and related regional networks were also in attendance. Participants seemed quite familiar with EEW and most also seemed to have gotten the ShakeAlert UserDisplay software (Version 2.4.1p2) and loaded it onto their own computer system. 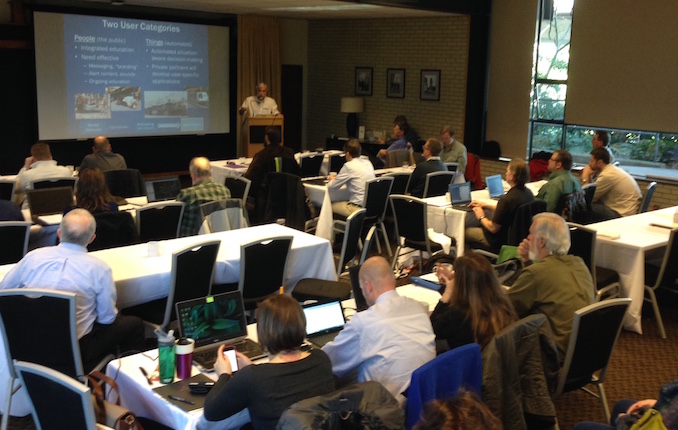 Doug Given of the US Geological Survey presents an overview of the history, current situation and future plans for a US West Coast EEW system, including costs, time-line and perspective users.
The meeting started with welcomes by Bill Steele and John Vidale and introductions around the room of participants. Paul Bodin gave an overview introduction to EEW in general, some technical definitions and specific issues and spent some time demonstrating the ShakeAlert-UserDisplay. He included some examples of where and how it has been used elsewhere; particularly in Japan.
John Vidale presented a rather technical overview of our experience running the test prototype system here at the UW and some of the changes we have made for its specific use in the Pacific Northwest. This illustrated the degree of success we have had and example problem cases where it didn't work as well as hoped. The bottom line is that with the changes made due to this experience we should expect it to work well for events within our region and of up to magnitude 7. For larger events it will produce alerts but will likely underestimate the degree of shaking expected, at least until a geodetic component is integrated and more tests are done.
Ann Bostrum presented some social science insights and expectations of EEW based on past experience from the tsunami warning and hazard mitigation efforts and from potential user surveys. Example questions such as: Have you experienced an earthquake. What would your first response be if you felt an eq. Can EEW help protect you. Who should pay for EEW. How bad are false alerts? What would you do with 10 sec and with 5 min of warning. What would you do with automatic alerts.  How could EEW be most useful to you. These results as well as very preliminary results from a cost/benefit analysis indicates that education, training and practice will be critical for the effective use of EEW and that it can definitely be cost effective under even just life-safety type benefits.
The 45 minute lunch break allowed participants to chat in small groups and for specific technical questions to be handled by PNSN staff. At the end of lunch a test earthquake event was broadcast through the whole PNSN ShakeAlert system. Of the approximately 25 participant laptops in the room only about 7 produced the expected on-screen alert information. Many laptops were asleep and thus could not receive the alert messages but it was not clear if there were any that simply did not work because of technical problems, improper software installation or configuration issues.
Afternoon presentations included a big picture overview of the history and future of the US effort in EEW given by Doug Given, the US Geological Survey EEW Coordinator. This included the history from the earliest ideas of EEW in 1868 through practical uses in Mexico and Japan to its development in California and expansion to Washington and Oregon. Costs of a completed system to be ready in about two years amounts to about $38M in capital costs and $16M per year for operation. From 2002 until now about $29M has been spent that leads toward EEW but also has had impacts on many other parts of earthquake hazard mitigation projects. Doug emphasized the need for a shared and cooperative development process involving many different partners and user groups/types that would participate in development aspects from simple things like user display design to the really big problems like funding sources.
Josh Bashioum from Early Warning Labs gave a presentation as an example of a commercial value added company who has a Cooperative Research And Development Agreement (CRADA) with USGS to help pass on the ShakeAlert warnings in a variety of real-world situations. They are in the process of developing and implementing interfaces to a variety of systems such as firehouse bay doors to automaticaly open, audible PA systems to alert personnel and private communication radio systems for automatic notification of personnel. They are also working to develop and/or modify smart phone apps to alert individuals.
The workshop ended with requests again made of the participants to work with the EEW developers to make sure that the information being produced is of maximum utility and in a form that will be easy to use.
Questions and suggestions made during the workshop
Home
Recent Earthquake Map
Recent Earthquake List
Seismic Stations Map
Earthquake Search
QuickShake
Contact us
Helpful Links:
Fan Page Public Group